The most common example of concentric/eccentric load training is a bicep curl with weights.  When done correctly, by positioning the elbows in an isolated position next to your waist, the weight is pulled up from the waist to the shoulders, shortening the muscle.  This is concentric or positive muscle training.  The next step is to bring the weights back down to the waist. This is eccentric or negative muscle training. Both strengthen the muscles, just in opposing ways.

But which form actually strengthens more effectively? In modern day fitness it is common to think that strength is synonymous with concentric training; pumping weights to form muscles into

large, bulky shapes seen on the likes of the Incredible Hulk or Arnold Schwarzenegger.  Picture a professional body builder: they look very strong because he or she has “big” muscles, however compared to the strength of a ballerina, whose strength training is more specifically eccentric, pound for pound she is much stronger. And all this is done WITHOUT added weights! 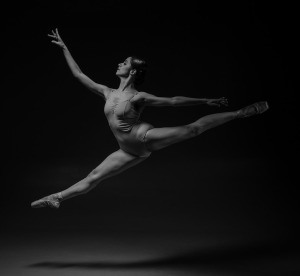 Now, hold up!  You’re saying a ballerina is stronger than a bodybuilder?  Yes!  Because when the body is trained eccentrically, arms, legs, torso extended away from the body, the load is automatically heavier, which recruits as many muscle fibers as possible to move and hold the extended limbs.  Concentric training, on the other hand, only recruits the muscle fibers needed to bring the weight closer into the body.

To clarify, let’s go back to that bicep curl example. When the weights are pulled up concentrically, the bicep is strengthened and shortened, however when performing a negative (bringing the weights back down to starting position), both the bicep and it’s opposing muscle, the tricep, are used: the bicep to control the weight on the way down and the tricep to extend the arm at the elbow.  Moving the weight eccentrically then recruits a lot more deep muscle fibers to allow the muscles to move the weight down safely to avoid injury. These deep fibers are also needed to be strong and stable for daily functional movements.

Eccentric training, when done without weights, is not only a very safe method of training but it is the most effective strength training!  The other great benefit to eccentric training, as opposed to concentric training?  The joints and connective tissue are liberated instead of compressed.  It allows increased range of motion around the joints, which by definition is flexibility!

In the end, however, it would not be correct to point out the importance of concentric training to our program.  There are several instances where concentric training is vital and one is abdominal training.  Our abdominals play a very important role in core stabilization, spinal heath and correct posturing to name a few.  It is our role, as fitness professionals, therefore to strengthen the core in any way we can.

For more information on the Essentrics® program, please visit: http://www.essentrics.com.

(Principles of the Essentrics® Program by Miranda Esmonde-White)

I'm a wife, a mother, a Registered Dental Hygienist, and a certified Essentrics® instructor. My motto is, "Find balance in everything!"